Gastown in Peace and War 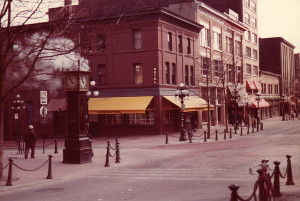 Gastown, a National Historic Site of Canada, is the area northeast of Downtown Vancouver, British Columbia, within Hastings, Main, and Richards Streets and the Burrard Inlet waterfront. Vancouver’s first downtown core, where it all began and where the roots remain visible in cobblestone streets and antique streetlights, all of which look like a slice of history between the high-rises of Downtown and the waterfront train yard. Gastown’s name comes from legendary “Gassy” Jack Deighton, a steamboat captain who in 1867 opened the first saloon.

Early Gastown prospered as the site of a sawmill, a seaport, and, not least, an after-hours resort for loggers, fishermen, and the crews of sailing ships. In 1886, the town incorporated as the City of Vancouver but lost all but two of its buildings in the Great Vancouver Fire of that same year. The rebuilt area thrived again as an important ferry and steamship docking and staging area with Hastings and Main as the town centre.

After the Great Depression of the 1930s, Gastown fell into decay, decline, and disrepair as a skid row area of cheap beer parlours and flophouses. In the 1960s, citizen concern over preservation of Gastown’s distinctive architecture, which, as in nearby Chinatown and Strathcona, was to be torn down to clear space for a freeway into Downtown, drove a campaign that in 1971 persuaded the provincial government to declare the area an historical site to protect its heritage buildings.

Perhaps Gastown’s most famous landmark is the steam-powered clock at Cambie and Water streets. Built to cover a steam grate of Vancouver’s distributed steam-heating system, the clock prevents street people from sleeping on the grate in cold weather. The low-pressure downtown-wide steam heating network from a plant adjacent to the Georgia Viaduct powers a miniature steam engine in the clock’s base. 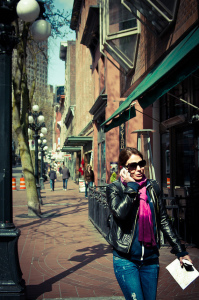 Gastown endured decades of neglect as the derelict part of town. Recent revitalization has turned skid row into a stylish destination of unusual enterprises in entertainment, gastronomy, and hospitality. On Alexander Street near Main in the northeastern corner of Gastown, the Alibi Room has “50 taps of local & imported craft beer,” some exclusive to the pub, for beer lovers. On Water Street, there are great meal deals at Pourhouse. On Blood Alley Square, a banner of an upside-down salt shaker beckons passersby to the Salt Tasting Room, a small, friendly tavern where patrons can “assemble a Tasting Plate from our chalkboard’s selection of 10 cheeses, 10 meats, and 10 condiments. The selections change constantly, making it almost impossible to have the same Salt experience twice.”

For visitors to Vancouver, parking is no easier and probably more difficult in the busy nightlife of Gastown than in any other part of Downtown Vancouver. Fortunately, the presence one block west of Richards and Water streets of the SkyTrain Waterfront Station and the terminal of the Seabus to North Vancouver makes Gastown access much easier than by car.