Renfrew-Collingwood Up and Coming

Renfrew–Collingwood, the second most populous Vancouver neighbourhood after Downtown, had over 50,000 residents in the 2011 Census. A large, diverse eastside neighbourhood on the Vancouver-Burnaby boundary with substantial business centers and some fast-growing residential sectors, this neighbourhood had a population of 44,950 in 2001, 43.6 percent of whom then spoke Chinese as their first language. Canada’s 2011 census reported only 28 per cent of Renfrew-Collingwood residents as native English speakers. Chinese, Filipino, and Vietnamese are the languages heard most often on the streets.

In 1861, Colonel Richard Moody built a military trail through the area from New Westminster to English Bay. By 1891, Canada’s first electric interurban railway along Vanness Avenue connected Vancouver’s Downtown to New Westminster and opened the area to what became the thriving community of Collingwood near the present intersection with Joyce Street, and to the north the Renfrew district began to grow in the 1920s.

Over the years, the two areas grew together with commercial developments along Kingsway, Grandview Highway, and Boundary Road and growing numbers of condominiums and multi-family residential developments joining traditional single-family

In 2007, the City of Vancouver announced several neighbourhood centre programs as parts of an Eco-Density initiative to rezone Renfrew–Collingwood from single-family to duplex with rowhouses along busy streets to increase density and encourage commercial development along Earles and Rupert streets. The plan is controversial; many residents want their neighbourhood to retain its traditional single-family home character.

The Collingwood Village community around the Joyce-Collingwood SkyTrain station is a story of successful redevelopment that might be instructive in the ongoing unrest over plans to redevelop neighbourhoods across the city. Renfrew-Collingwood once faced the unpleasant prospect of too many people packed into multifamily homes, but residents worked with the city government and a sympathetic developer to reach a satisfactory result. A new daycare facility was a welcome amenity.

Completed in 2006, Collingwood Village was the largest master-planned community in British Columbia at that time. The developer constructed 16 condominium and rental buildings of four-storey town homes and mid- and high-rise apartments. Since the 1990s, 2,700 new homes have gone up on what had been industrial land south of Vanness Avenue and east of Joyce Street. Kingsway shops and services are a few blocks south. More than a quarter of the community is parkland.

In 2011, the city council approved a rezoning proposal for 33 parcels of land east of Collingwood Village within Boundary Road, Vanness Avenue, and Ormidale Street to be developed as Wall Centre Central Park, three residential towers of 28, 29, and 30 storeys, all higher than any present Collingwood Village structure. In April 2013 the first 623 units went on sale, almost half priced under $300,000. 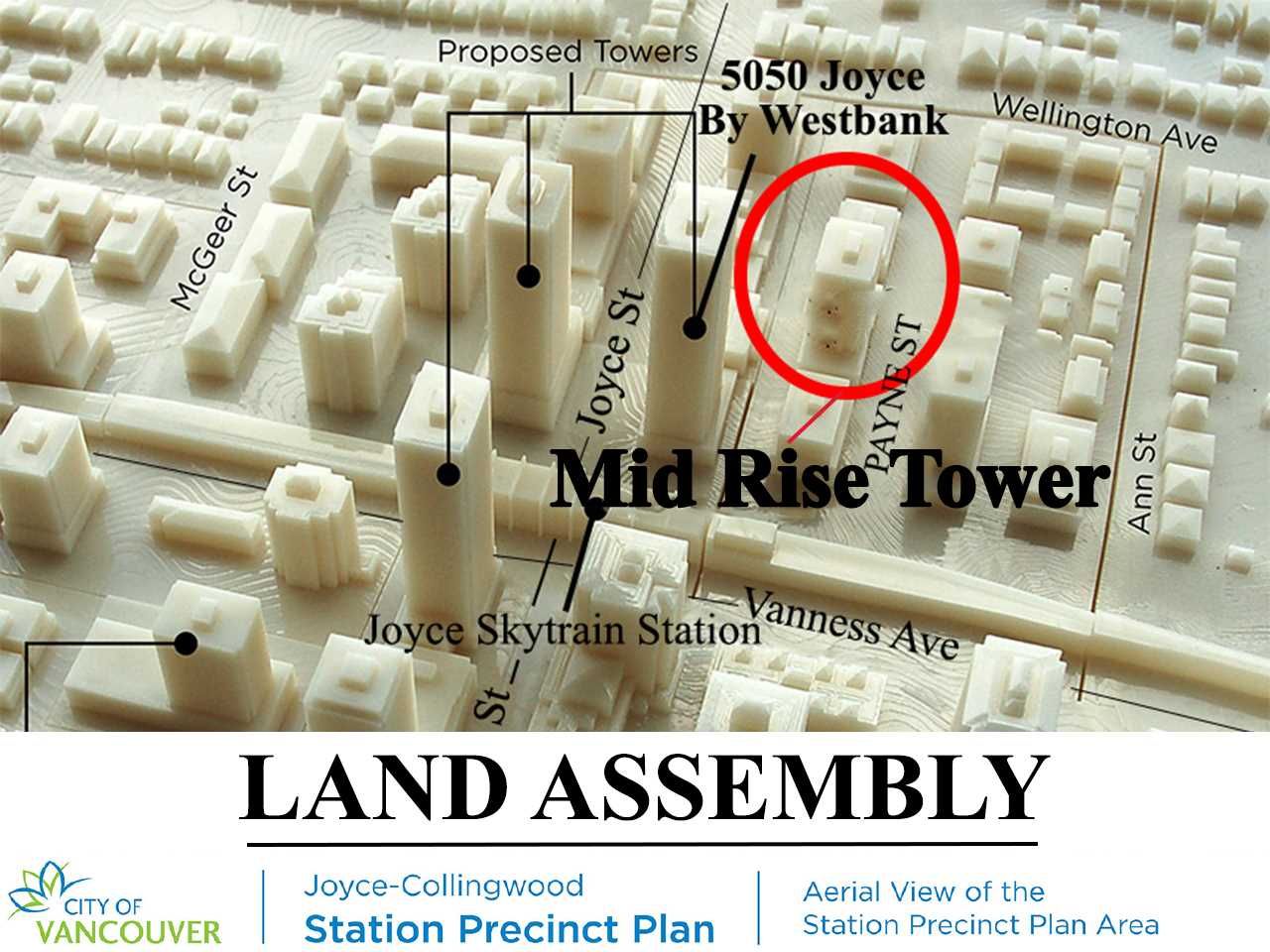 City has zoned this and the neighbouring lots as MID RISE BUILDING 140ft 4.5 FSR. Most of the area is zoned townhouse or low rise condo but this little area is potentially zoned MID RISE 140ft 4.5 FSR. Great opportunity to buy now. Perfect for investors or developers. Directly behind Westbanks's approved 30-storey tower. Steps from the Joyce-Collingwood SkyTrain Station. Most of both sides of Payne St is for sale. Amazing opportunity for the right developer. Call for more info

These statistics are generated based on the current listing's property type and located in Collingwood VE. Average values are derived using median calculations.
To access this information,
please create a free account
Get market change alerts