Ups and Downs in Kerrisdale [p.4] 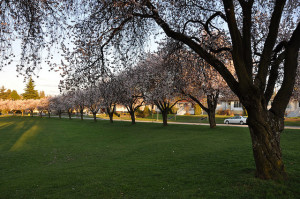 In the Canadian City of Vancouver, British Columbia, the affluent westside neighbourhood of Kerrisdale lies between 33d Avenue on the north, Blenheim Street on the west, West Avenue on the east, and the Fraser River on the south. Commercial shopping districts are along West 41st Avenue from Larch to Maple streets and along West Boulevard from 37th to 47th avenues.

The 2006 Census reported 14,615 inhabitants. Originally thoroughly British demographically, Kerrisdale has received since the mid ’80s an influx of affluent Hong Kong emigrants, many of whom have built large, modern houses, making Kerrisdale an architectural mixture of lavish new and renovated houses. In 2007, Blocktalk.ca reported an estimated median annual household income of $113,286, much higher than the average for Metro Vancouver generally.

In 1862, the McCleery family became the first to farm the land of the present McCleery Golf Course on the river. By the mid-1870s, with many more families farming the area, the logging industry was well underway. A local legend is that “Kerrisdale” is a corruption of “Kerry’s Dale,” the ancestral home in Scotland of an early resident who, when asked to choose a name for a British Columbia Electric Railway station for the area, made that choice. In 1912, the streetcar went from Kerrisdale along then-graveled 41st Avenue to Granville Street, where connecting service took passengers to Downtown Vancouver.

Until 1929, when they merged to form the City of Vancouver, three municipalities, Vancouver, South Vancouver, and Point Grey, which included Kerrisdale, provided local government services. Point Grey Secondary School, founded in 1929, and the Point Grey Golf & Country Club recall those earlier days. The Kerrisdale Community Centre now occupies the block on which the Point Grey Municipal office once stood. 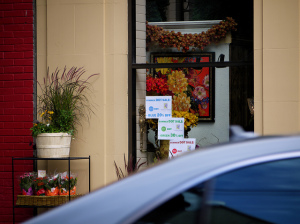 The West 41st Avenue businesses between Larch and Maple streets belong to the Kerrisdale Business Association. In all, about 250 businesses and property owners are members. Established in 1990, it is the oldest business association in Vancouver. Members fund general area maintenance and beautification, hiring a full-time gardener during summer months. The association employs for its properties a nighttime security force that operates during daytime hours as well in December.

Every September, association members elect a board of directors of about 25 individuals who then appoint executive officers. The full board meets on the first Wednesday of every month. Dedicated board members engage fully in committees on beautification, finance, marketing, parking, publicity, and security.

Inevitably, there must be a downside to the steady rise in Kerrisdale property values. As an example, Thomas Hobbs opened a gift shop on West 41st Avenue near West Boulevard in the heart of the business association area in 1989 and operated it for 23 years until closing in December 2012. Hobbs said the gift shop was Vancouver’s “home store” for which he travelled to Italy and France for high-end merchandise artfully displayed behind his store windows. Hobbs lamented that most shoppers now seem to prefer big box stores over independent retailers.

Hobbs said the gift shop is not the only victim of Kerrisdale’s changing times. To make that point, his 2012 Halloween storefront display had tombstones etched with the names of other Kerrisdale independent businesses that have closed in recent years. Hobbs said annual rent on his retail space had increased tremendously to $120,000, half of which pays the landlord’s property tax. He estimated that he has paid millions of dollars in rent since opening the shop in 1989.