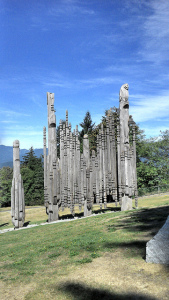 The Canadian City of Burnaby in the Province of British Columbia adjacent to the City of Vancouver on the Burrard Peninsula is the seat of the Greater Vancouver Regional District Government (Metro Vancouver). Burnaby covers 38 square miles in the central part of the peninsula between Vancouver on the west and New Westminster, Coquitlam, Port Coquitlam on the east. The Burrard Inlet on the north and a channel of the Fraser River on the south complete Burnaby’s borders. The 2011 Census reported a population of 223,218, more than a third of which is ethnically Chinese, Korean, or Japanese.

At incorporation in 1892, residents named their municipality after explorer Robert Burnaby, who in 1859 had surveyed the freshwater lake near the city’s present geographical centre. At first a rural agricultural area for nearby urban markets, Burnaby became a first-tier bedroom suburb as Vancouver expanded into a metropolis. Over time, Burnaby itself shifted in character from rural to suburban and now to urban, finally reaching city status in 1992, when the Corporation of the District of Burnaby became the City of Burnaby

Burnaby has many industrial and commercial enterprises. Metropolis at Metrotown is British Columbia’s largest commercial mall. Major technology firms Ballard Power Systems, Electronic Arts, and Telus operate in Burnaby. There are Chevron and Petro-Canada petroleum refineries on the shores of the Burrard Inlet. Electronics firms Future Shop and Nokia have significant facilities in Burnaby. The Online Trading Academy has an administrative office center, and film production studios and TV stations add a lively media presence.

SkyTrain, the rail rapid transit system of Greater Vancouver operated by Translink, Metro Vancouver’s regional transportation agency, has its headquarters in Burnaby. SkyTrain runs fully automated trains on grade-separated tracks mostly on elevated platforms from which passengers enjoy vistas over the city and which help maintain the system’s highly punctual performance. The Skybridge, the world’s longest cable-supported bridge dedicated to transit, crosses the Fraser River between New Westminster and Surrey. On the streets, the Coast Mountain Bus Company, a division of Translink, operates a busy bus service.

The Trans-Canada Highway skirts Burnaby Lake on its course through the city center from Vancouver to Surrey and onward to the east. On Sea Island 10 miles away accessible by SkyTrain or a 20-minute drive by car, Vancouver International Airport operates daily flights to destinations worldwide.

At 1,200 feet, Burnaby Mountain in its northeastern corner near the Burrard Inlet reaches the city’s highest elevation, and the encompassing Burnaby Mountain Conservation Area is a scenic home to the Simon Fraser University campus and to resident and transient deer, bears, and coyotes. Kinder Morgan, which calls itself “a different kind of Energy Company,” proposes to reroute a section of its TransMountain Pipeline from a residential area to a more direct route through the mountain. The proposal would triple pipeline capacity, Kinder Morgan claims. 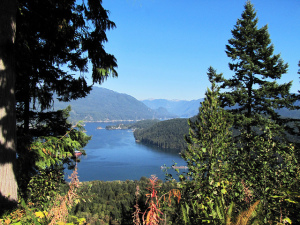 In May 2014, Burnaby filed a request with the Canadian National Energy Board demanding additional information, arguing that the project would force Burnaby citizens to endure significant new risks and costs for many years. The board announced in July 2014 that it would delay action on Kinder Morgan’s permit application to afford more time for study and public comment.

The City of Burnaby