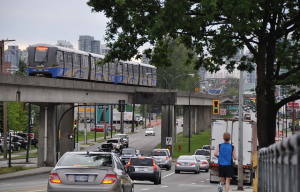 Grandview–Woodland is a neighbourhood in the City of Vancouver, British Columbia, Canada east of Downtown extending from the south shore of the Burrard Inlet to East Broadway with Clark Drive as the western and Nanaimo Street as the eastern border and containing most of popular Commercial Drive. The neighbourhood is a vibrant commercial, industrial, and residential mixture with a rich ethnic makeup. Busy Hastings Street and First Avenue run from west to east run through the neighbourhood while Victoria Drive and Commercial Drive run through it from north to south. Much of the neighbourhood is on an east-west rise of land that stretches through eastside Vancouver.

Grandview–Woodland had 27,297 residents in 2011, a slight decline from 28,205 in 2006, when there was a three-percent decrease from the 2001 Census. About 10 percent self-identify as aboriginal. Over 63 percent speak English as a first language, 14.4 percent Chinese, and French, Spanish, and Italian are also common. Two-thirds of residents are renters of low-rise apartment buildings. The median household income of $35,300 is substantially lower than the $47,000+ city average.

A small cove on the inlet was the first point of early development, a brewery followed by sawmills. After the sawmills clear-cut the entire Grandview–Woodland area, the Interurban electric train line to New Westminster after 1891 spurred expansion of the new community. One legend is that the name “Grand View” first appeared on a sign next to the Interurban stop near present the Commercial Drive/1st Avenue intersection. By 1906, booming construction had built homes throughout the neighbourhood. Commercial Drive became a major business thoroughfare, and people of many ethnic backgrounds moved into the neighbourhood during the early 20th Century. 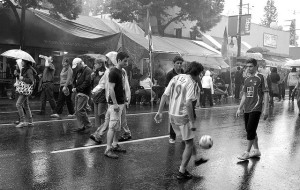 Commercial Drive, a street of many small shops and perhaps the single most popular area of Grandview–Woodland, has been a key to commerce for nearly a century for its ethnic and cultural diversity of the shops that populate it. “The Drive” has ethnic hangouts that during the World Cup playoffs bring out soccer fans of many nationalities. So essential is it to the economic and socal life of Grandview-Woodland that most Vancouverites refer to the neighbourhood as the Commercial Drive area. The Drive has such a concentration of cafes that it’s an amazement that there is enough business for all, but each has its own loyal clientele, and cafe hopping is like a world tour of ethnicities.

A June 2013 draft encountered a mixed reception. Although the community supported many proposed policies, others associated with gentrification and involuntary displacement met strong opposition. As the city describes the process, “The Citizens’ Assembly on the Grandview-Woodland Community Plan . . . will learn from planning specialists and community representatives, it will hear ideas and recommendations from the broader community, and it will develop its own recommendations . . . in a final report to Vancouver City Council no later than June 30, 2015.”

The city says the assembly of 48 randomly-selected registered volunteers broadly representing Grandview-Woodland diversity will meet on ten Saturdays between September 2014 and April 2015 from 9:00 AM to 4:00 PM and will conduct three public roundtables to hear from the community.