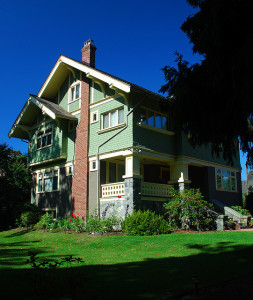 The Grandeur of Shaughnessy

The Shaughnessy neighbourhood in Vancouver, British Columbia, Canada, is one of grand heritage homes. Its borders are 16th and 41st avenues on the north and south and Oak and Arbutus streets on the east and west. Shaughnessy is not a good fit for the Vancouver grid pattern of streets and avenues; instead, many roads loop and meander with the hilly terrain of the highest area in the city aside from nearby Queen Elizabeth Park. The neighbourhood’s estimated population is 9,000. Its name commemorates Thomas Shaughnessy, the American chief executive of the Canadian Pacific Railway from 1899 to 1918 when the king raised him to the British peerage as a first baron in 1916.

Shaughnessy has sprawling homes with enormous gardens. In September 2010 the average house sale price was $2,955,059. Average neighbourhood annual household income is $136K+, considerably higher than the Metro Vancouver average. In Shaughnessy, 51.5 percent of neighbourhood housing dates from before or during the Second World War II compared to 20.8 percent city-wide. The objective of the December 1998 First Shaughnessy Official Development Plan of the City of Vancouver is “to protect and preserve Shaughnessy’s unique pre–1940 character.” Two neighbourhood streets, Beverly Crescent and Cedar Crescent, have the highest average home values nationwide. 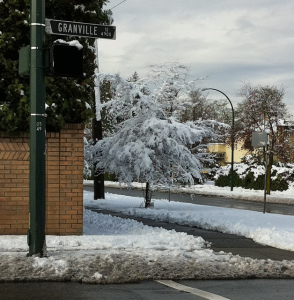 The Canadian Pacific Railway developed the land for the First Shaughnessy neighbourhood in the early 1900s. The federal government in Ottawa granted the railroad, then the largest Canadian real estate developer, Old Shaughnessy north of King Edward Avenue as an inducement to extend its service to the West Coast. “First Shaughnessy” between 16th and 25th avenues and Oak Street and East Boulevard was the first such Canadian Pacific-developed subdivision. The area subsequently extended south of King Edward as far as 41st Avenue. The success and appeal of First Shaughnessy were so great that in the late ’20s and early ’30s development of adjacent land created the Second and then the Third Shaughnessy, where lots and houses are mostly smaller and more modest but still impressive by any measure.

A main Shaughnessy attraction is the VanDusen Botanical Garden, from 1911 to 1960 home of the Shaughnessy Golf and Country Club as lessor and tenant of the Canadian Pacific Railway until the club moved to a new location. The railroad proposed a subdivision, which many influential citizens opposed, so in 1966 the VanDusen Botanical Garden Association formed to assist the Vancouver Park Board in acquiring and redeveloping the property. Acquisition and redevelopment funds came from the City of Vancouver, the British Columbia Government, the Vancouver Foundation, largest of Canada’s community foundations, and industrialist/philanthropist W J VanDusen, the garden’s namesake. VanDusen Botanical Garden opened in August 1975. 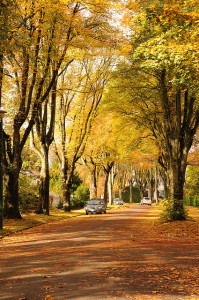 The Heritage Vancouver Society sponsors weekend morning two-hour walking tours of Shaughnessy architectural wonders and landscaping delights. The Glen Brae Mansion on Matthews Avenue, once after its career as a private home the headquarters building of the Canadian Ku Klux Klan and now the Canuck Place Children’s Hospice, features twin, domed towers framing its front entrance. Hycroft Manor on McRae Avenue between Marpole Avenue and The Crescent around Shaughnessy Park, perhaps Vancouver’s most fashionable address, has 30 rooms on five acres housing the University Women’s Club of Vancouver since 1962. Hycroft Manor is open to the public for the club’s annual fundraiser, Christmas at Hycroft, and for many other events throughout the year.